FROM THE EXECUTIVE DIRECTOR’S DESK

As 2008 is ending, I wish to repeat my common statement that: “KADETFU is not stunted, it is growing” We started in 1993 as a Baby but not an orphan. I say not an orphan because the organization had and still has Partners, Working relatives as well as Patrons who work tirelessly to nurture our organization. The growth is therefore however, moderate and promising.

In 1999, KADETFU had only four employed staff and 10 Field Volunteers. In 2008, KADETFU has a task force of 17 employed staff and 111 field workers and 3 foreign volunteers. It has partners from different countries in the world. The projects have increased from two to eight focusing on different issues that are indispensable to the human livelihood.

From a baby in 1993, KADETFU is now an award winner. In 2006, the organization won the "LAKE VICTORIA ENVIRONMENTAL AWARD 2006" while in 2008 is a winner of both the “LAKE ZONE CSO EXCELLENCY AWARD" and the "TANZANIA CSO EXCELLENCY AWARD 2008". This is a very high growth rate that has never happened before. However, it is neither a magic nor witchcraft. The Excellent CSOs in this world, needs "Good Governance, Transparency, Participatory and Involvement, Responsiveness and Accountability; the criteria (states of affairs) which were used to gauge the Excellency of our organization. 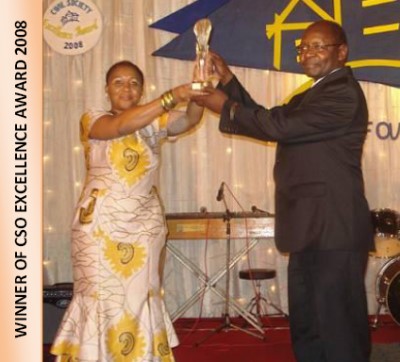 Again, this cannot happen unless there is an immense of collaboration, networking and teamwork within the organization itself as well as with other stakeholders, partners and other actors with common grounds. This necessitates me to appreciate all of you who in one way or another contributed to this vast growth of our organization. We thank you for your support, guidance and encouragement. Let us continue working together in 2009 and beyond in order to maintain the above said five “state of affairs”.

In 2009, KADETFU plans among others; to focus on ACCESS TO CLEAN WATER AND SANITATION (MGD 7 Indicator 30 & 31). Sanitation is fundamentally about poverty reduction since world-wide the richest are four times likely to use improved sanitation than the poorest. It is the hygienic means of preventing human contact from the hazards of wastes to promote health. According to the United Nations, sanitation is a foundation for health, dignity and development. Increased environmental sanitation access especially for poor people is therefore fundamental.

On the other hand, Water is essential for human development and livelihood support systems.

As WHO puts it in its water campaign publications, “Water is life” without which all living things, i.e. Man, Flora and fauna could not be in existence. Water is essential for human use at households for cooking, washing and drinking. It maintains hygiene for the families that ensures good health. For production, water is needed in all spheres of production cycles; be business, industrial as well as community service cycles. We therefore request all our partners to give us an hand and let us achieve our intended goal for year 2009.

I WISH YOU ALL A PROSPEROUS NEW YEAR OF 2009