THE EFFECTS OF BANANA XANTHOMONAS WILT (BXW) ON FOOD SECURITY

THE EFFECTS OF BANANA XANTHOMONAS WILT (BXW) ON FOOD SECURITY AND THE PEOPLE'S LIVELIHOOD: The Case of Nshamba and Rubale Divisions in Kagera Region, Tanzania 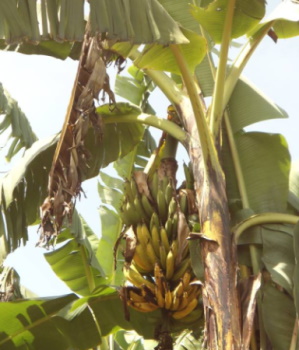 Since late 2000s the majority of communities in Kagera region have been affected by Banana Xanthomonas Wilt (BXW), the banana disease known as “Mnyauko” which has consequently jeopardized assurance of food security and people’s livelihood at both family and community level. In recognition of its threat, last year (2012) the government authorities in Kagera region declared BXW a national disaster which needs immediate interventions. This study is the contribution to the initiatives of the region in trying to raise community awareness on the symptoms, mode of spread and effects of the disease to their livelihoods and sensitization on the measures to curb its spread.

In this regard, Kagera Development Trust Fund (KADETFU) and Centre for Development Initiatives (CDI) conducted this study whose goal was to assess the effects of BXW on food security and income to the community, including farmers in the Region. The study used a sample of Nshamba and Rubale divisions of Muleba and Bukoba Rural Districts respectively. I believe the observations from the sample reasonably reflect the situation and effects of BXW on both the food security and people’s livelihood.

I also believe that this study has been conducted at the right time when our country and the international community are trying to address BXW in a comprehensive way in order to control and possibly eradicate it. The study as well encourages the government to formulate policies and strategies to address the disease. I anticipate that the recommendations of the study will motivate the public and private agencies, Ministry of Agriculture, Food Security and Cooperatives (MAFC), international agencies as well as development partners to collaborate and join hands in curbing the disease for sustainable livelihoods in Kagera region and elsewhere in the country and the world at large.

It is also my hope that the contributions of the authors in this study will provide the essential additions to the debate and dialogue on BXW, as well as assist in creating new approaches of curbing BXW effects on food security and livelihoods of the communities and thus improving the living conditions of people. At the invitation of His Excellency President Kaguta Mseveni, in December 2011, I took a group of 140 farmers from Muleba to Uganda for an agricultural study tour to learn how our neighbors were coping with the challenge of BXW. We learnt a lot but above all that cultural practices must be followed strictly. I urge the readers of this book to adopt the recommendations and to recognize and take on their own responsibility in combating the disease. Finally no amount of external assistance shall help if we do not play our part.

I thank you all and congratulate the Authors who are responsible for the facts and views in this study.