I am glad to inform you that KADETFU is a winner of two awards that were presented on 28th November 2008 at the Civil Society Ghala that was held at Peal Hotel, Ubungo Plaza.  The "LAKE ZONE CSO EXCELLENCY AWARD" and the "TANZANIA CSO EXCELLENCY AWARD 2008". The criteria examined the CSO's five scenario, "Governance, Transparency, Participatory, Responsiveness and Accountability" 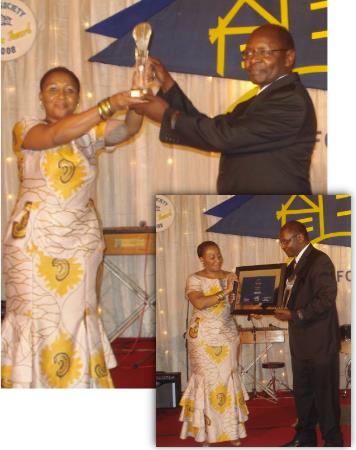 With the "LAKE VICTORIA ENVIRONMENTAL AWARD" which we won in 2006, this confirms the Excellent status of KADETFU; and undoubtedly, you are among those who contributed to these great achievements. We therefore wish to thank you for your support, guidance and encouragement.

Let us continue working together in 2009 and beyond  in order to let us maintain the above said five state of affairs.
I WISH YOU A PROSPEROUS NEW YEAR OF 2009

In the picture:
Executive Director Of KADETFU receiving The Awards from the Chairperson of FCS